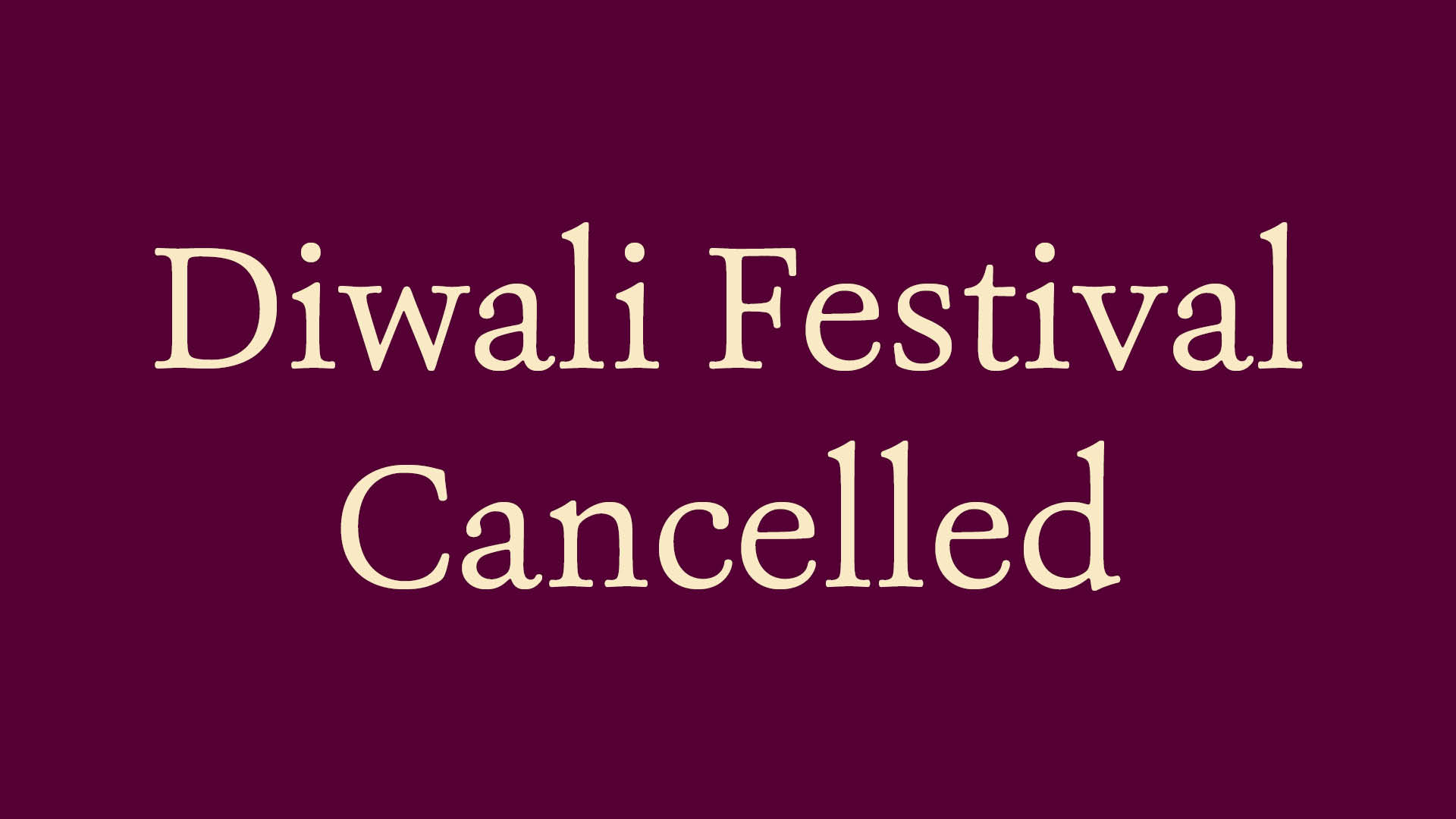 THIS YEAR’S DIWALI FESTIVAL HAS BEEN CANCELLED

Hare Krishna, this year’s Diwali Festival on Sunday the 23rd October has unfortunately been cancelled. We are unable to handle the amount of cars that would be visiting, due to the bad weather and rainfall which has affected the parking fields. We apologise for any inconvenience caused.

Darshan will remain open as normal and a ticket is no longer required to enter between 10am-8pm. Note that there will be no stage program. 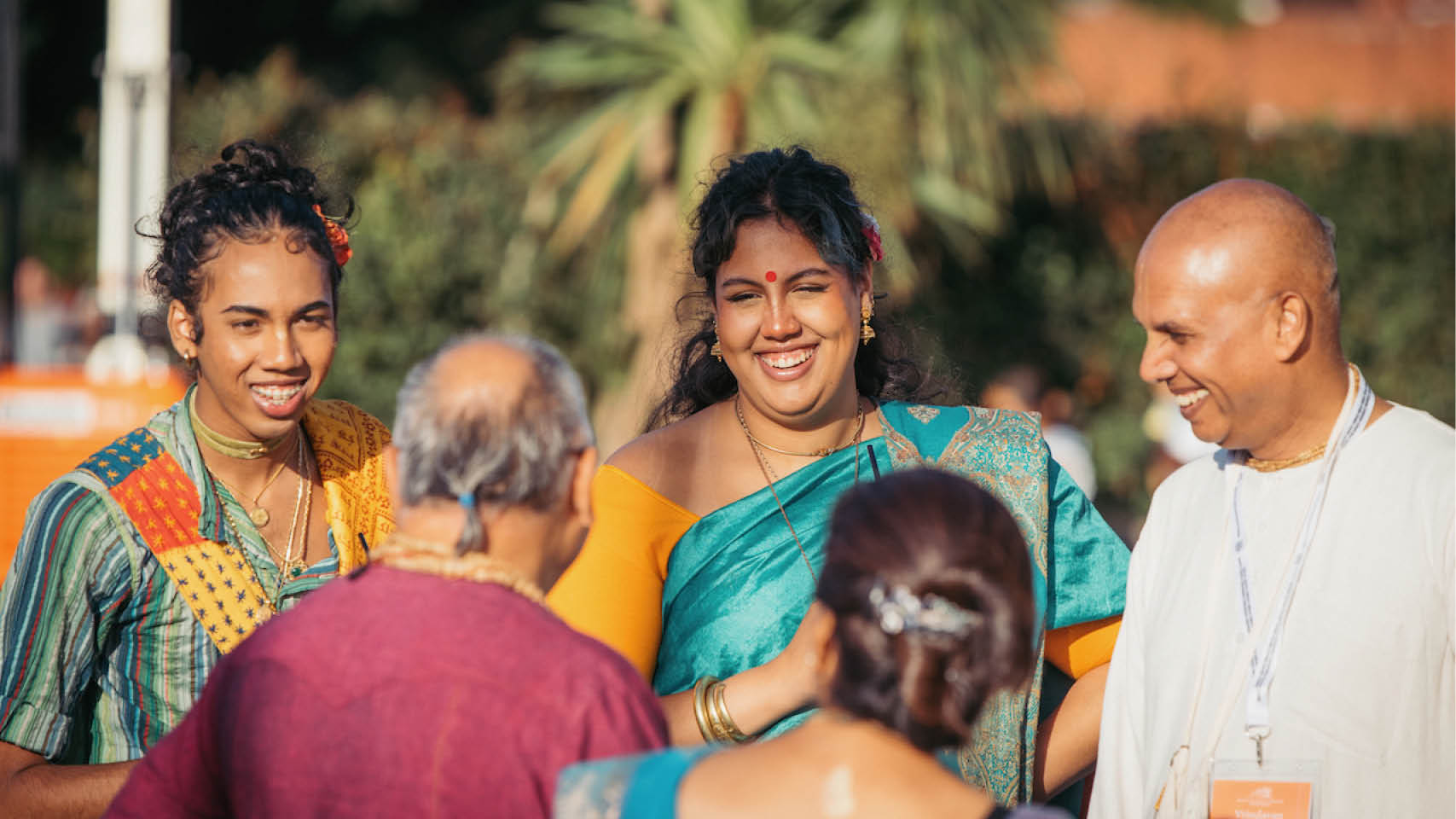 To help ensure that every pilgrim, visitor & well-wisher is able to have a pleasant experience, we require you to book a ticket. Without a ticket, we will be unable to permit entry, so please ensure that you do book.

When are tickets released?

Why do I need a ticket?

– By booking your time slot, this helps us create a better and smoother experience for you, with shorter queues and more space to participate in the festival.

– Reduces heavy traffic in the surrounding area, making it easier for you to attend and creates less disruption for locals and non festival-goers.

– Helps us to be less wasteful, as we can prepare appropriate quantities of resources and prasadam (sanctified food).

What are the ticket times?

A ticket is required to enter Bhaktivedanta Manor between 10am-8pm. If you arrive before or after this window then a ticket will not be required.

Tickets are not required for children under 5.

What happens if I arrive without a ticket?

In order to enter Bhaktivedanta Manor on this day, a ticket is required. If tickets are still available, we may ask you to book a ticket online via your phone. If not you will be returned from the car parks.

Can I come for mangal arati and guru puja?

How long can I stay?

You are welcome to stay and enjoy the festivities for as long as you like. Your ticket time only relates to your arrival time.

What if I arrive earlier / later than my booked arrival time?

How can I cancel tickets?

As you can imagine there is a great demand for tickets and so we humbly request you to please release any extra tickets you may have booked, so that as many visitors as possible can take part in the festivities.

If you are having trouble cancelling the tickets using the above link, please email us at ticket@krishnatemple.com and we’d be happy to do it for you. Similarly, if any family members also have tickets that they won’t be using, please let us know so that we can cancel their ticket and make it available to others.

Will there be free parking?

Yes, there will be free parking available on the geo-grid and the fields. Please note that the fields can be bumpy, and potentially muddy this time of year.


Is there parking available for wheelchair users?

When arriving, please make the requirement for wheelchair accessibility known to the car park volunteers so they can direct you to the correct area to park.


Is there special parking available if you are a disabled badge holder, eldery, or pregnant?

When arriving, please make the requirement for special accessibility known to the car park volunteers so they can direct you to the correct area to park.

Will there be a shuttle service from Stanmore?

There will be a shuttle service from Stanmore Station to Bhaktivedanta Manor for the Diwali festival. More details and booking information to follow.

What can I expect on the day? 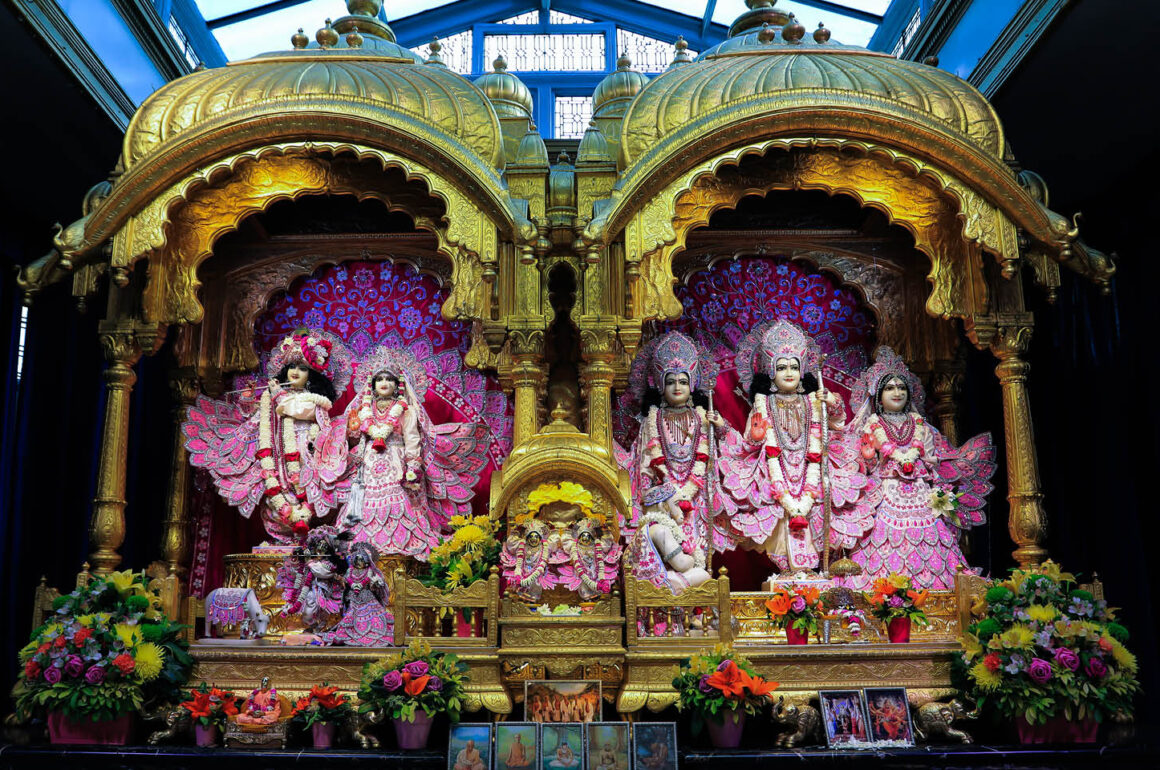 The celebration of Diwali is one of the largest festivals held at Bhaktivedanta Manor, with several thousand people attending each year. Every visitor can expect a festival in the truest sense, with something for everyone – including a stage program filled with entertainment, drama and music, free meals, and an opportunity to see our lovely cows.

But most importantly, you will have the chance throughout the day to see Lord Rama, Sita and Lakshman on our beautiful altar, which will be lit with many lamps. So, please bring your friends and family and join us for this magical occasion.

To mark this auspicious occasion of Diwali, many wonderful arrangements are being made to celebrate at Bhaktivedanta Manor. Many thousands of pilgrims will be coming to celebrate this special occasion. Please support this year’s festival with your heartfelt contribution. 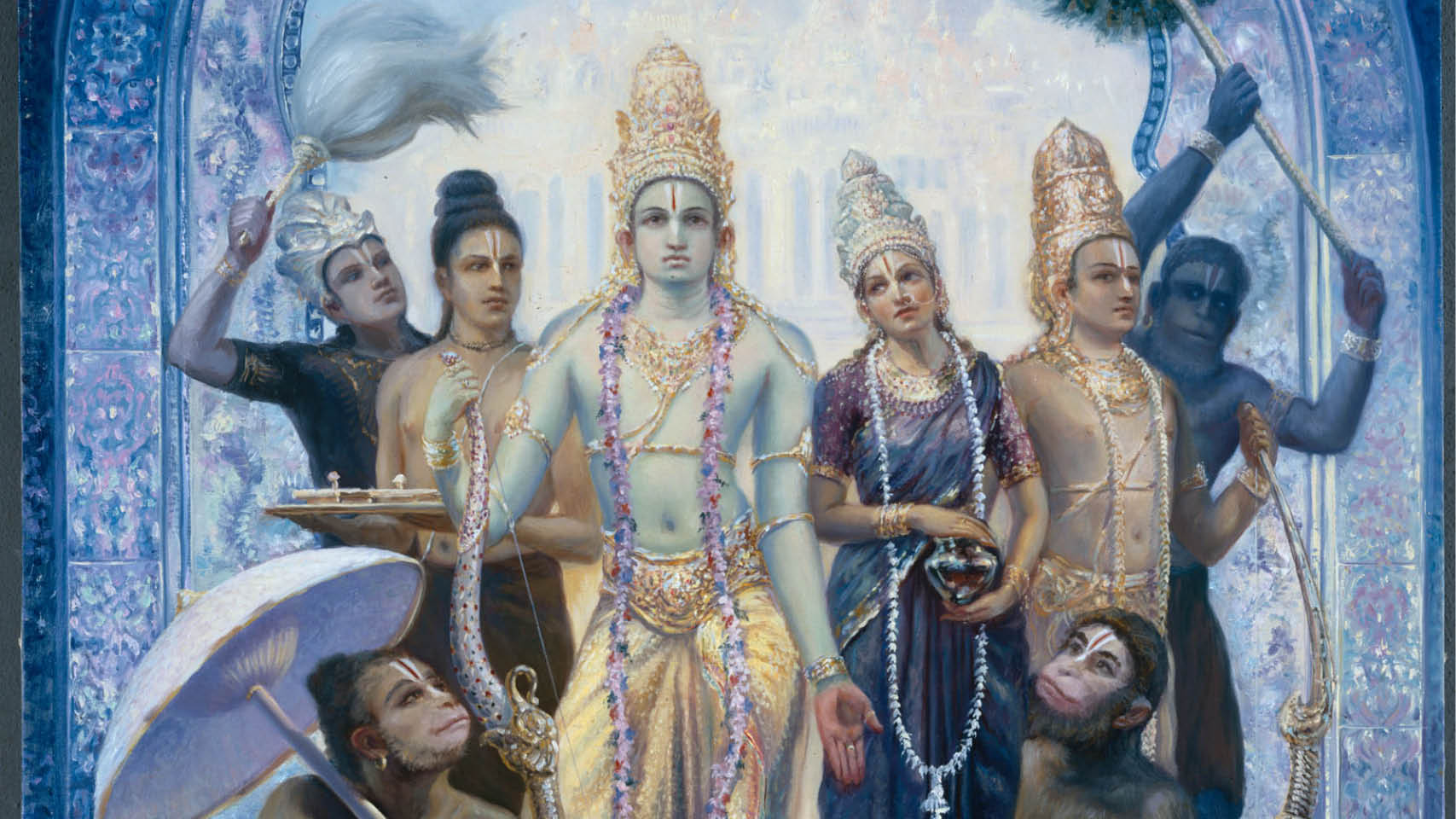 The festival of Diwali is traditionally observed for five days, but it mainly celebrates the joyful day upon which Lord Rama returned to the kingdom of Ayodhya after fourteen years of exile. The name itself comes from Dipavali, a Sanskrit word referring to the countless rows of lamps which His citizens had lit throughout the kingdom to welcome Him back home (dipa means “lamp, light or candle,” and avali means “rows”). During a different era, this was also the day when Lord Krishna performed His childhood pastime of breaking pots of yogurt and letting His mother bind Him with rope.

About the Five Days of Diwali 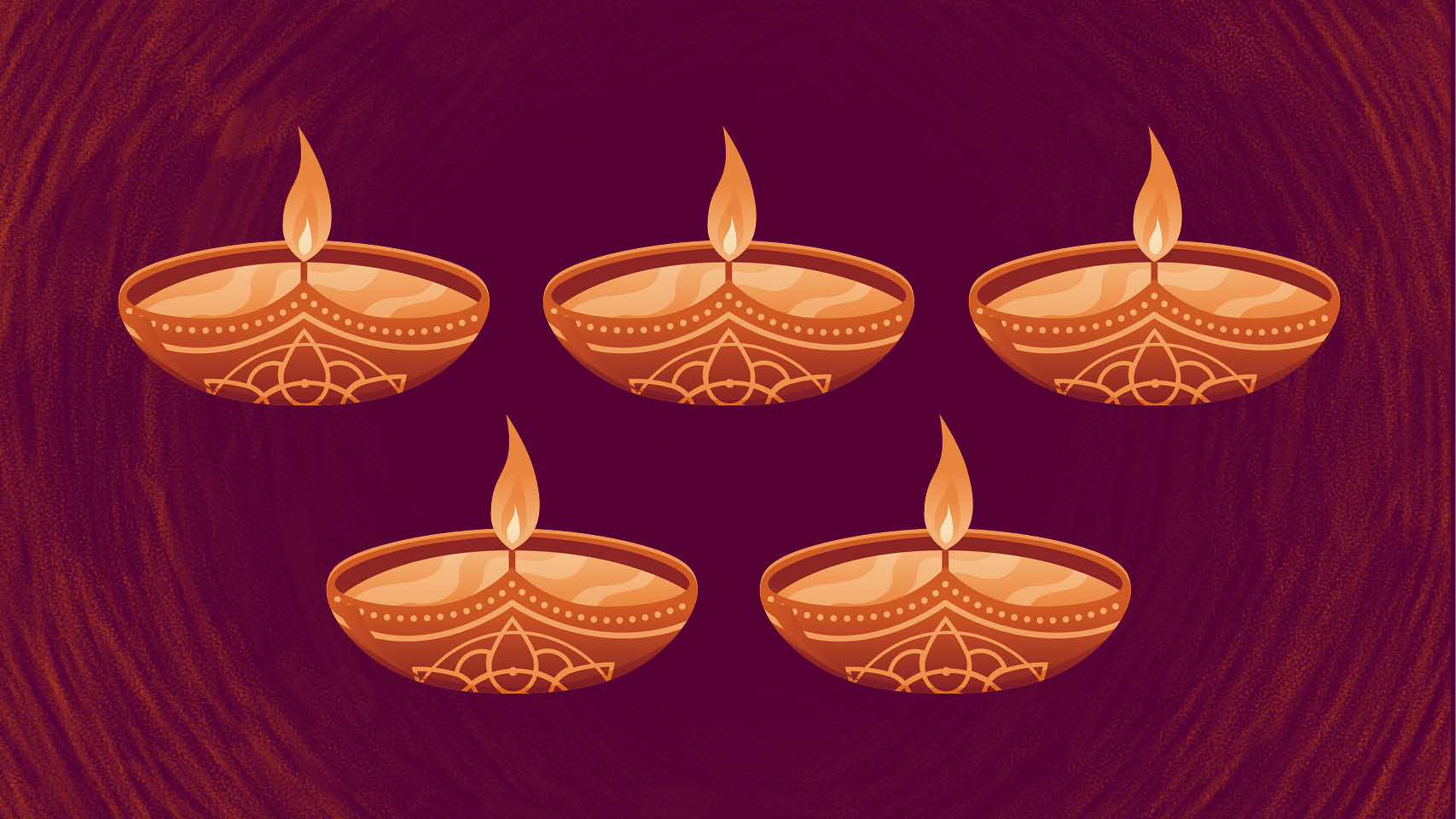 The first day of Diwali is called Dhanvantari Trayodasi, which is when Lord Dhanvantari appeared on this planet in order to give Ayurvedic medicine to mankind. On this day, Hindus pray for protection from untimely death.

The second day of Diwali is called Naraka Chaturdasi, and is the day upon which Lord Krishna destroyed the demon Narakasura and liberated the 16,000 princesses which the demon had been holding captive.

The third day is the actual day of Diwali, which is when Lord Rama returned to His kingdom after successfully rescuing Sita and defeating the demon Ravana. On this day, Hindus pray for the blessings of wealth and prosperity, and for the triumph of good over evil and light over darkness.

On the fourth day, Hindus perform Govardhana Puja, or worship of the sacred hill of Govardhana, a tradition which Lord Krishna Himself started roughly five thousand years ago.

The fifth day of Diwali is called Bhratri Dooj, which is a day dedicated to honouring the bond between brothers and sisters. Brothers visit their sisters to enquire about their welfare, and sisters pray for their brothers’ safety, success and wellbeing.