Srila Prabhupada called the spreading of Krishna consciousness “the real welfare work”. Without the impetus to share as exemplified by Sri Chaitanya Mahaprabhu and many saints after Him, there would be no Krishna Consciousness society today.

To create a full Harinam public chanting party, there are many roles to be filled. The kirtan leader, the mrdanga players, the kartal players, the flag bearers, the dancers, the prasadam distributors, the book distributors, and of course, the onlooking and engaged public. Sometimes the party may be small, sometimes it may be large. Sometimes it may be done on a warm and sunny afternoon by the seaside, sometimes it may be done on a cold and wet night in central London. Whatever the situation, the public chanting demonstration of of bhakti (devotion) goes on. 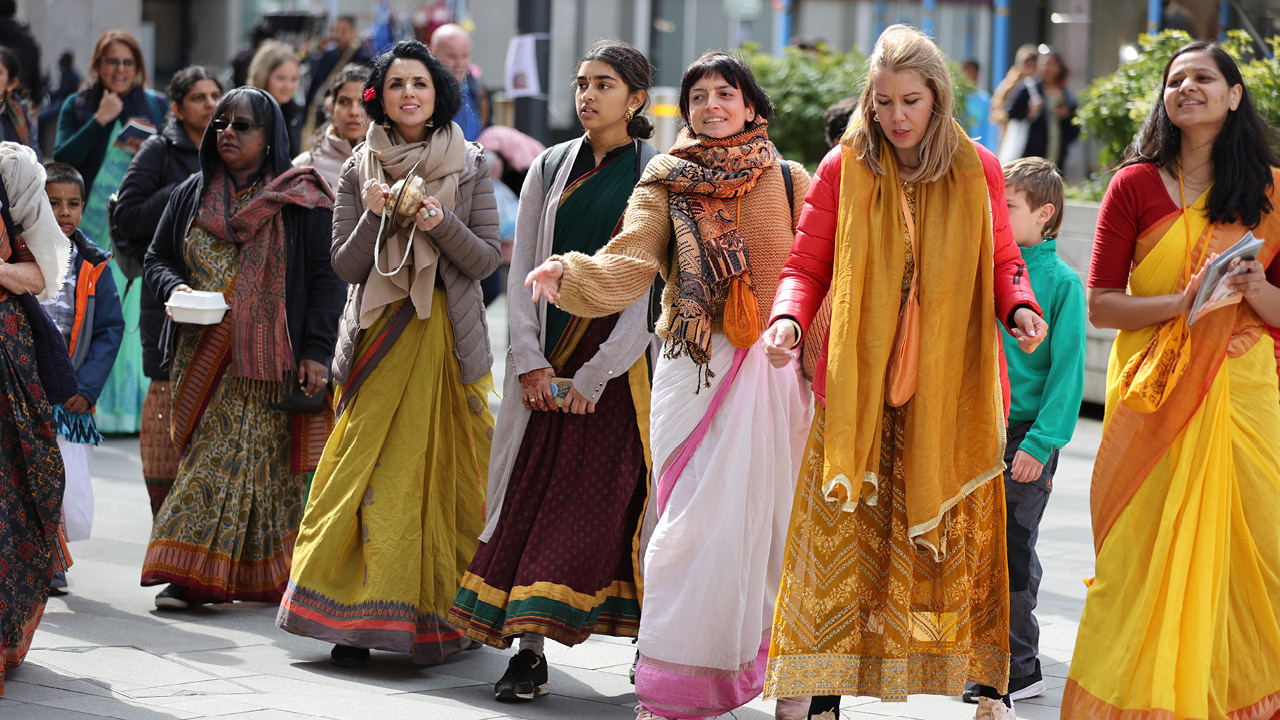 Harinam is the process of chanting the Holy Name of Lord Krishna in public, bringing spirituality to the streets. Often accompanied with musical instruments such as the mrdanga (drum), kartals (cymbals), and harmonium, this chanting is meant for the upliftment of society and for bringing positivity to every town and village.

We have a minibus that will take the travelling party to the town, the meeting point is at Bhaktivedanta Manor at 11am. Alternatively, anyone can join in the town by their own means. Please contact ananta@krishnatemple.com for more information or to reserve a spot on the minibus.
London Harinam (Evening)

Every Saturday, there are evening street kirtans around the West End, starting at the Radha-Krishna Temple / ISKCON London at 7:30pm. Contact info@iskcon.london or call their reception on 0207 437 3662 for more information. 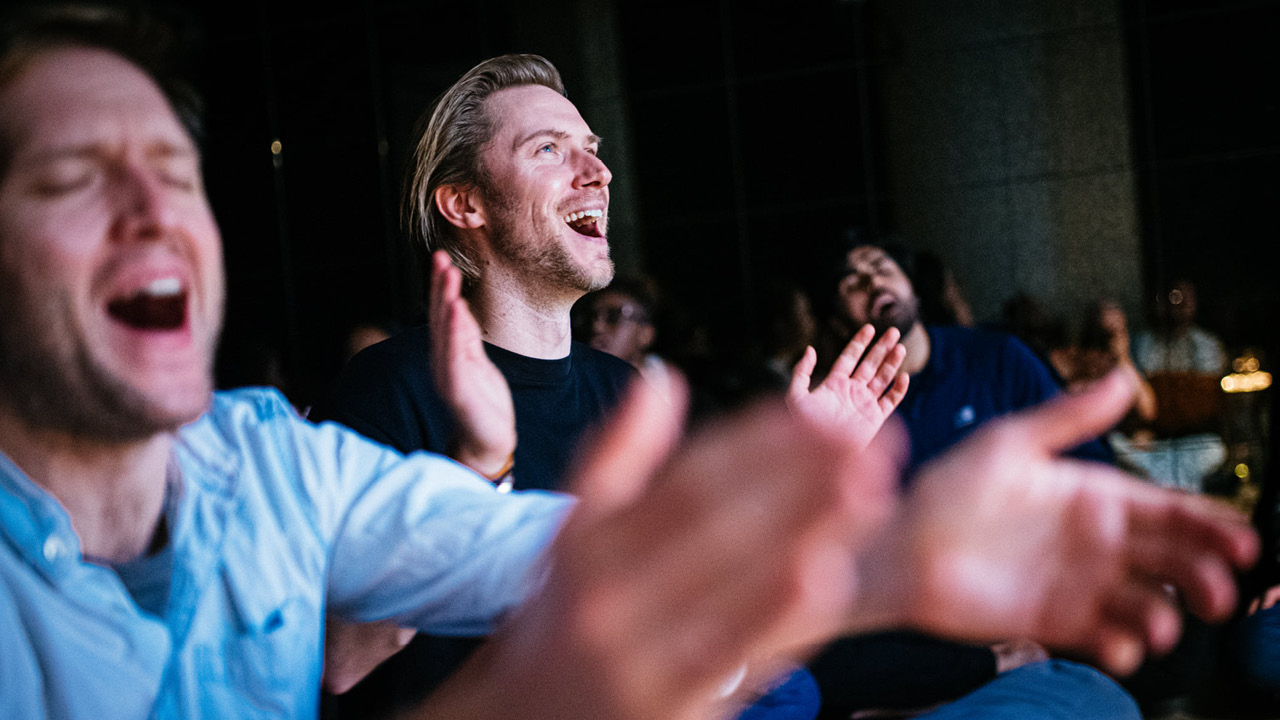 Creating spaces where philosophy and mantra meditation can be shared with people who are new to Krishna consciousness, allowing diverse audiences to get a taste of the Holy Name and to be part of growing communities in London and across the country.

Kirtan London is a not-for-profit community dedicated to creating accessible, enriching kirtan experiences and sharing this musical form of meditation with diverse audiences all over London. Visit the Kirtan London website for info on weekly events, retreats and other programs.

Krishna Wisdom is an initiative based at Bhaktivedanta Manor, that is aimed at providing spiritual wisdom to seekers of spirituality and philosophy who may be unfamiliar with the affiliated culture. Visit Krishna Wisdom for info on weekly events, retreats and other programs. 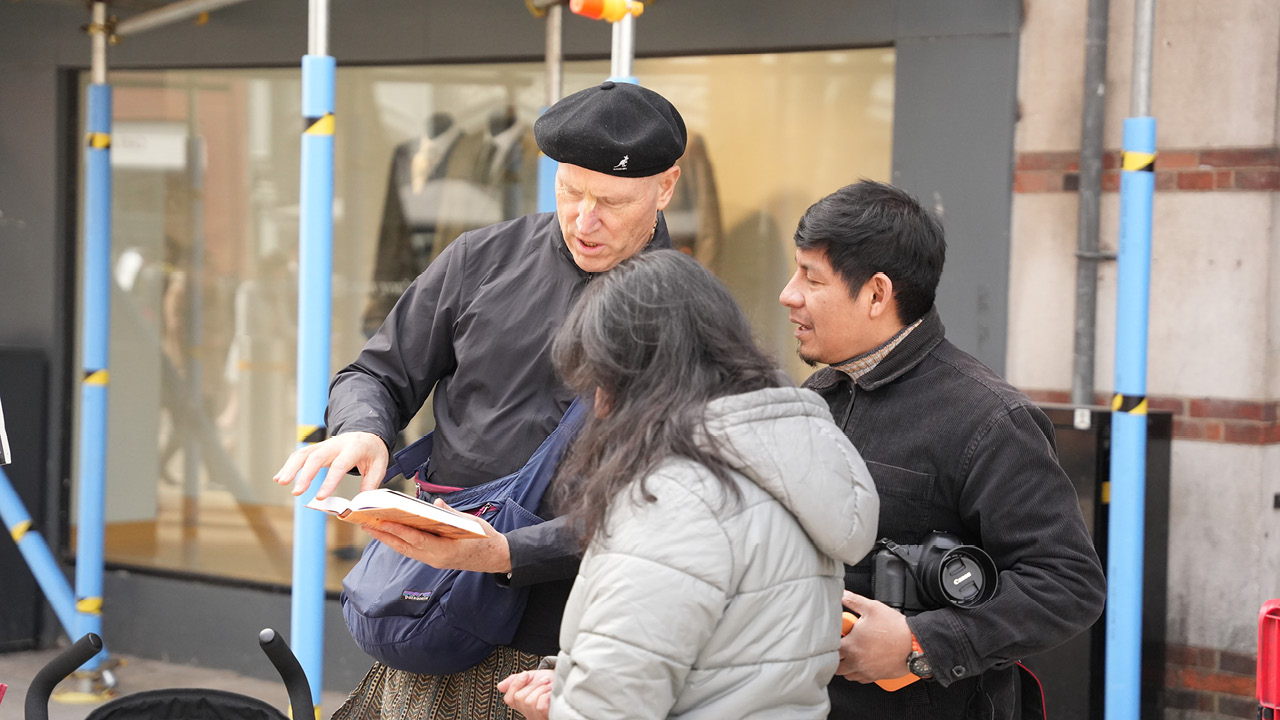 Ancient scriptures are not disconnected from our modern day social context; the teachings provide spiritual solutions for every prevailing issue of the day. The political, economic and social issues we witness are essentially caused by a neglect of spiritual values. Thus, devotees of Krishna, in a spirit of compassion, reach out to the world at large to share spirituality.

This is a monthly initiative visiting local areas once a month to distribute books, and then get together for a meal and share reflections. Please contact divyanama@krishnatemple.com for more information and to find out how to get involved.

The Go Matsya project is a global effort to save and preserve this Vedic culture through mass distribution and education. To get involved in distributing or sponsoring Srila Prabhupada’s books then visit the Go Matsya website.

If you wish to purchase a spiritual book, then a vast catalogue can be found on the Manor’s online shop. 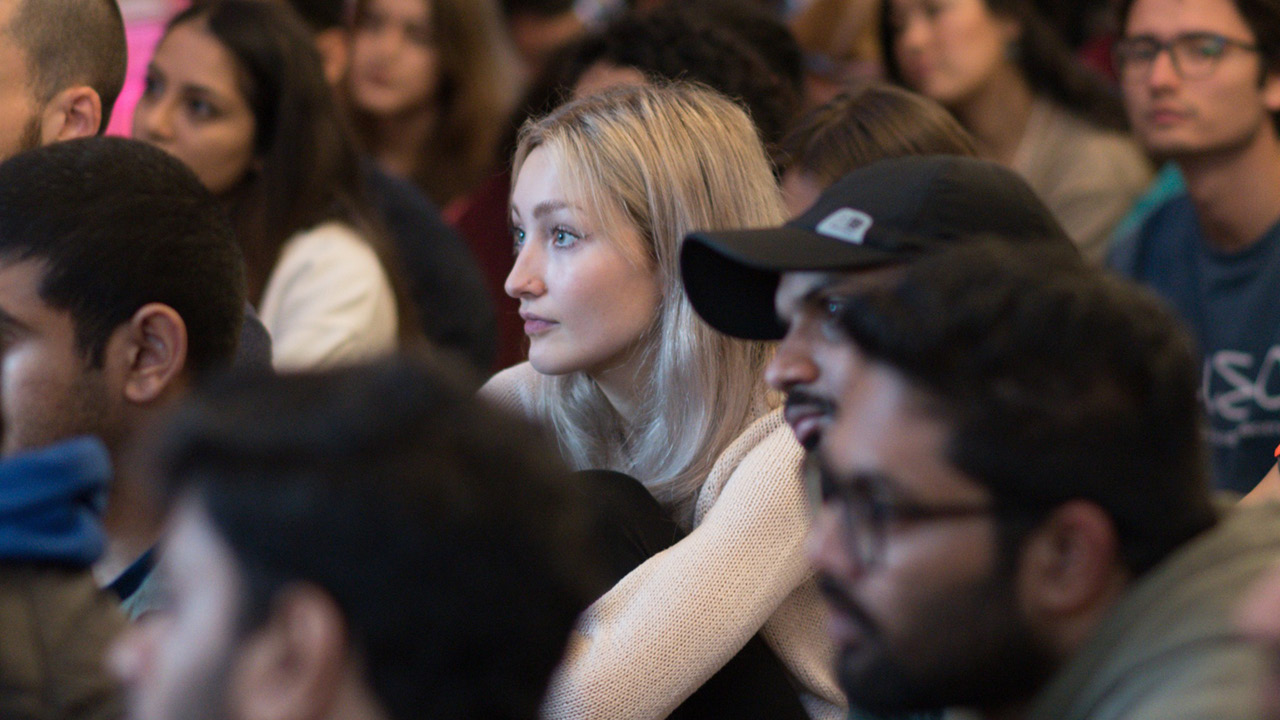 The Krishna Consciousness Society offers university students a platform to evolve the mind and give direction in life by connecting with like-minded people.

How can I get involved?

Visit the Krishna Consciousness Society website for info on events and programs at your university.