On the 7th October Bhaktivedanta Manor played host to a group of 24 young City professionals from all over the corporate sphere to get involved in some Corporate Social Responsibility of a different kind. The likes of Barclays Capital, Network Rail and Ernst & Young each had employee representatives who had given up their Sunday to cook a specially prepared 3 course meal, which was personally delivered and distributed by the cooks to various homeless shelters in and around Watford.

Working on behalf of the charity Food for All, the volunteers spent the morning cooking a kidney bean and potato curry, lentil soup, Indian breads, salad, a fresh fruit juice and a sweet dish for 200 people.

This year the Temple partnered with the Watford New Hope Trust who services the homeless and vulnerable people from nine different locations in Watford. These include: six houses and hostels; five support services; and three development services.

Bijal Majithia, project leader, commented: “The project has facilitated a nice exchange where the people serving are from very different environments to those who they have served.

“We hope and will endeavor to get more people involved in such wonderful initiatives in future, and build strong and positive relationships across as many areas of society as possible.”

Indeed, this project is one of many different, equally worthy causes where people from all over the world take part in this wonderful initiative known as Sewa Day. Sewa is a universal concept, which involves performing an act of kindness without expectation of reward. It is performed selflessly and without ulterior motive.

On Seva Day, thousands of people across the world come together to perform Sewa and experience the joy of giving in its truest sense. Food For Life for Seva Day will be specifically taking place in London and Hong Kong.

Food For life is a charity set up to cook fresh meals and distributes them to the homeless communities. The Temple has been involved with Sewa Day since its inauguration in 2010.

Roshni Thakrar, the youngest joint coordinator and fellow team leader for London said ‘‘getting involved in Seva Day is a humbling experience-making a real tangible difference to people and spreading some of the goodness that the Temple has to offer is something really special and we have a great team dedicated to the cause’’. 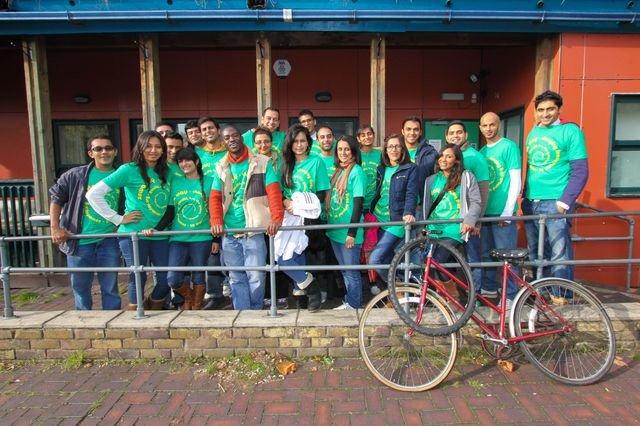 Each project that is organised is based on at least one of the guiding principles below:

In total 200 plates of pure vegetarian Prasad (sanctified food offered to the deities) was distributed and fed a lot of hungry stomachs.