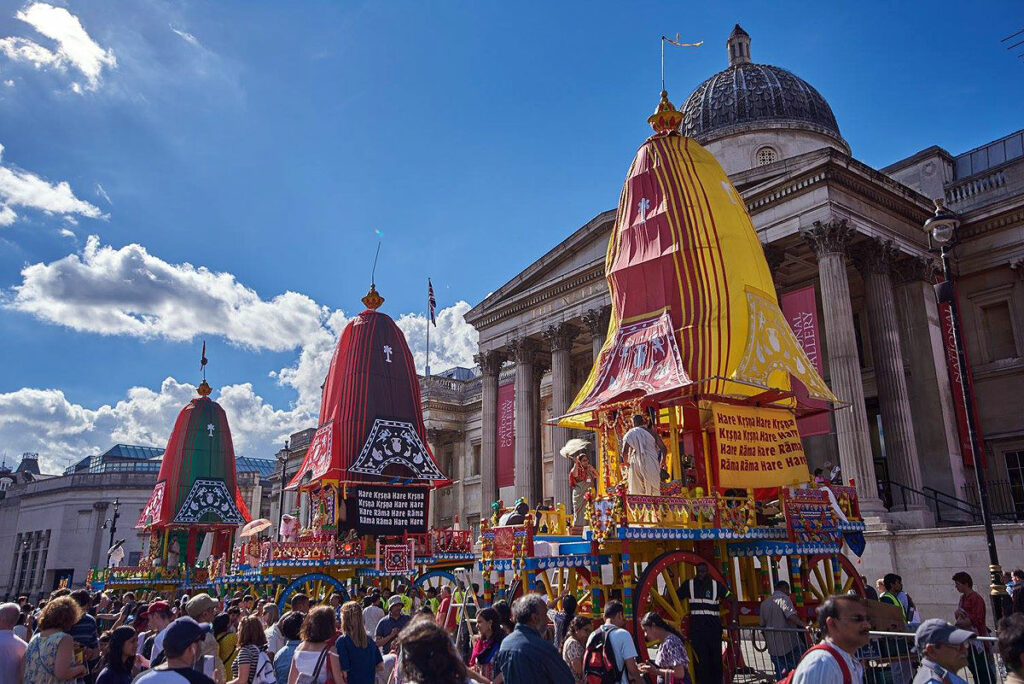 “Ratha-yatra” means “chariot festival”. This celebration has been held every year for hundreds of years at Jagannatha Puri, in Orissa on India’s east coast. There, three huge chariots, carrying the Deity forms of Jagannatha, Baladeva and Subhadra, are pulled by hand through the city streets amid loud musical performances. Millions of pilgrims come to the festival in Orissa. Jagannatha is a special and very merciful form of Krishna.

Ratha-yatra is the biggest street festival sponsored by ISKCON – and ends with a delicious, sanctified vegetarian feast. It is celebrated by devotees of Lord Krishna all over the world and was introduced to the West by His Divine Grace A. C. Bhaktivedanta Swami Prabhupada in 1967 in San Franscisco. The Ratha-yatra festivals are held at several different places across the country, the biggest in London.

The London procession starts from Hyde Park Corner, goes through Park Lane, Piccadilly and Haymarket and finally arrives at Trafalgar Square, where festivities continue till night. Drama, dance, philosophy and a feast are the highlights.

From any of the main London railway stations come on the Piccadilly Line and get off at Hyde Park Corner. When you come out of the tube station head for the south-east corner of the Park. The Rathayatra assembles near there so look out for the tall brightly coloured canopies of the Rath Carts.

Parking on Sunday is OK on single yellow lines in Westminster or you can stay safe with the NCP car parks. There is one just north of Trafalgar Square. Please remember there is no parking at the assembly point in Hyde Park nor any at Trafalgar Square.

The AA main routes and parking information. The procession assembles just inside Hyde Park -500 yards west of Hyde Park Corner. You will clearly spot the three colourful carts as you approach. There are three or four kirtan (singing and instrument) sections, each with dancers. You can pull the ropes on the cart (which bestows liberation) but please follow the instructions of stewards and staff. The cart leaves Hyde Park promptly at mid-day and arrives at Trafalgar Square around 2.30pm. This can feel like a long journey on a hot day and a OAP van is provided at the rear of the procession for the infirm. Bring a bottle of water to refresh yourself along the way.