Bhaktivedanta Manor during the pandemic

As we all know, the Coronavirus pandemic has been a major challenge for people across the world.

Shortly after first national lock-down in March 2020, Bhaktivedanta Manor was able to remain open for private prayer. This was possible due to stringent social distancing rules, temperature testing by covid-free volunteers, and the cooperation of Hertsmere Council and local Health Authorities. An innovative, free, online ticket entry system, established to guarantee effective social-distancing, facilitated the private prayer opportunities. In this way the temple provided much-needed spiritual relief for tens of thousands of people. 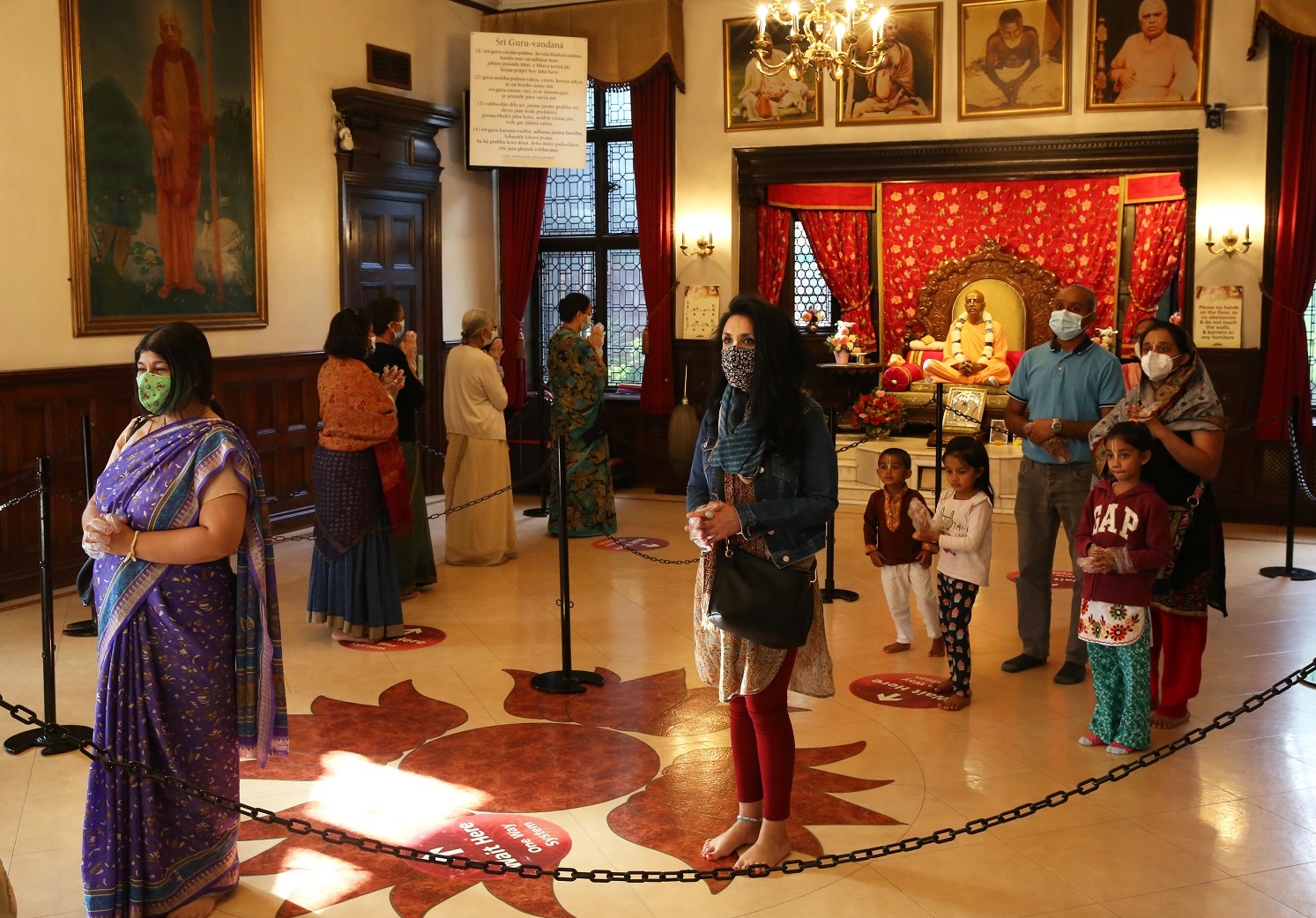 Between June 2020 to July 2021, 380,000 guests and devotees came before the temple shrine, making private darshan a resounding success.

Meanwhile devotees of Bhaktivedanta Manor offered pastoral care and other types of help for its huge congregation, especially for the most vulnerable and those who had unfortunately experienced loss in the family. 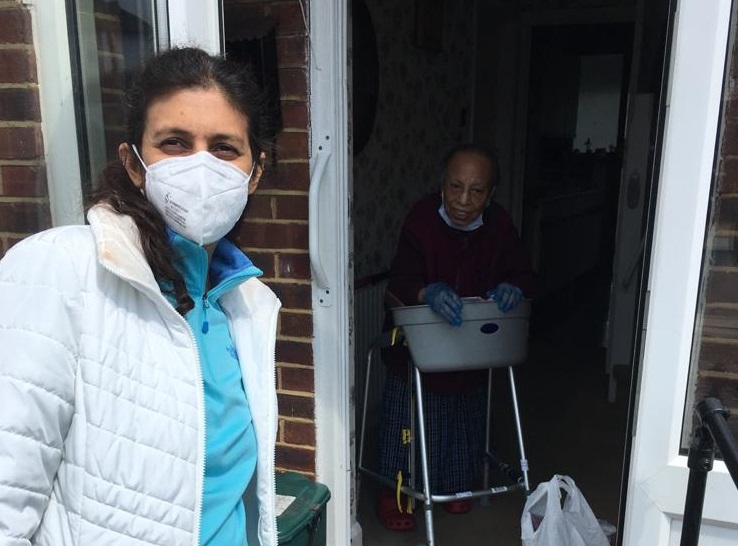 In spring 2020 volunteers made phone calls to about 1700 people enquiring about their well-being and offer physical support (delivering meals, shopping etc) as well as spiritual support. Volunteers were key to the Krishna’s Helpers team, which engaged 160 volunteers who made 11,000 calls.

Key volunteers also went out of their way to assist in many vital areas of the temple, including managing the darshan queue with social distancing, cooking, serving and cleaning. Indeed, they showed considerable courage even at the peak of the epidemic and still continue to serve. 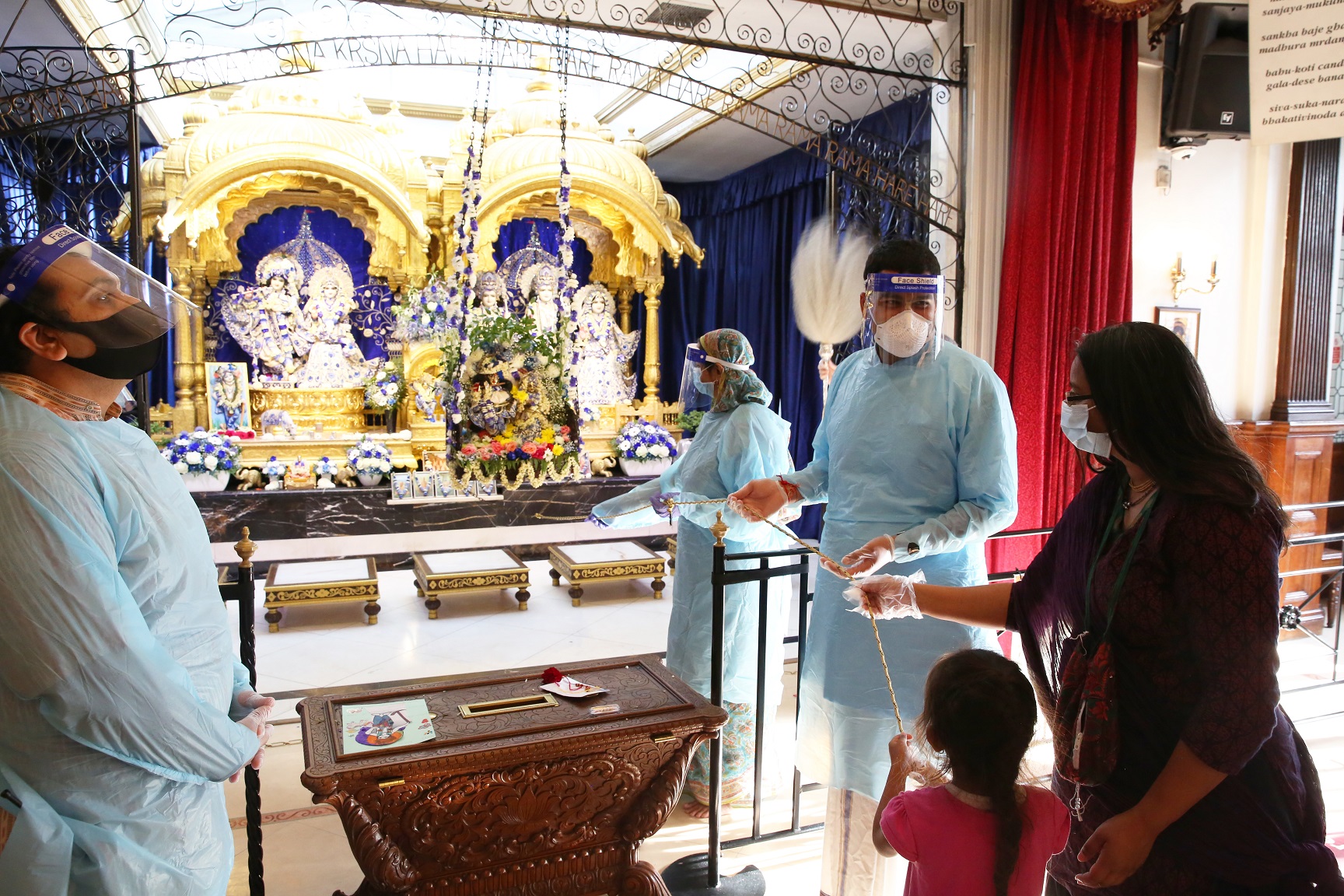 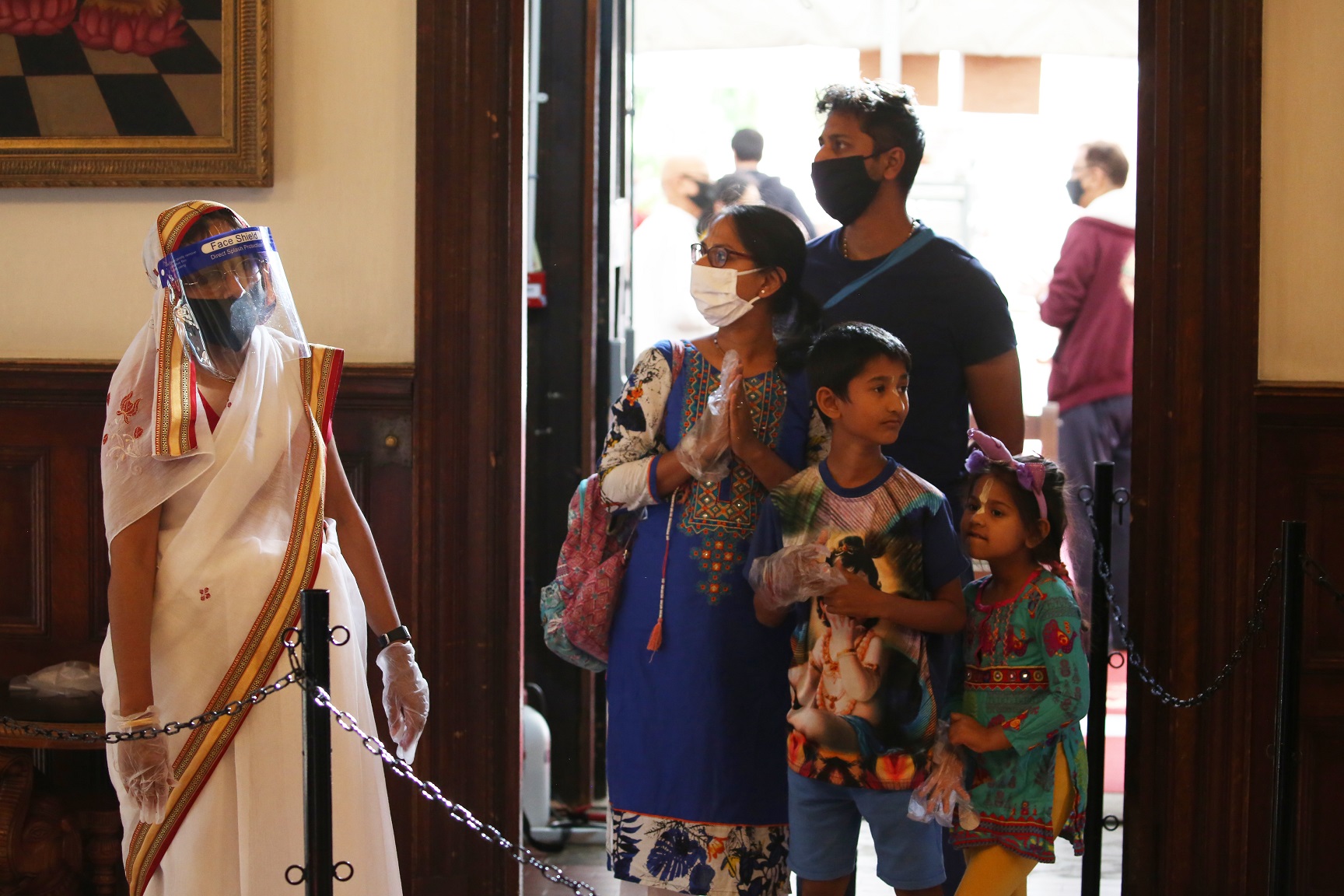 3500 free Meditation Care packages distributed in hospitals and care homes. These included meditation kits with beads, Chant and be Happy and the In Essence book. 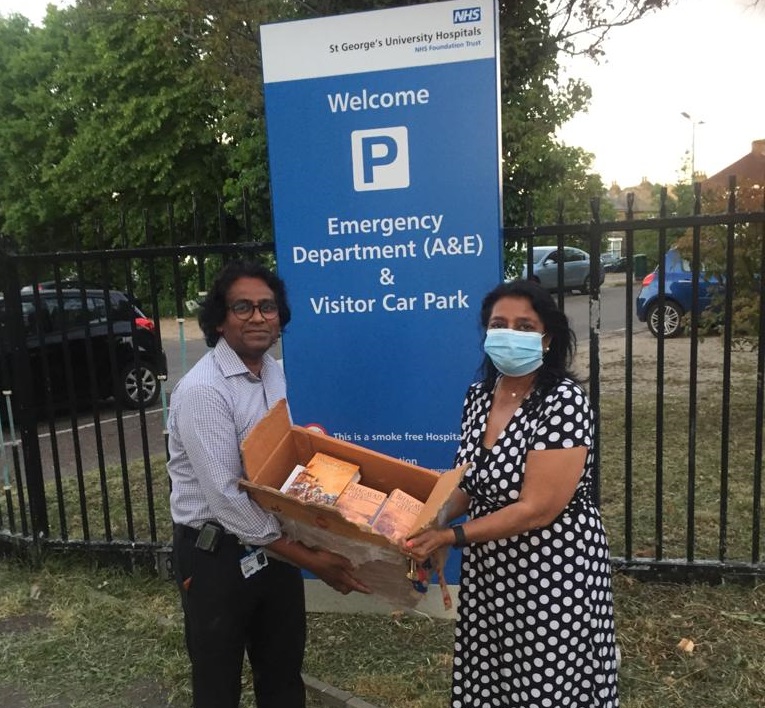 5000 free vegetarian Prasad meals were served to schoolchildren in Harrow.

In December 2020, the BMF celebrated an online recitation and discussion of the Bhagavad-gita in the Haveli. This Gita Jayanti festival turned out to be one of Bhaktivedanta Manor’s most successful online events.

Sangas run by trained mentees met regularly every alternate week over zoom for two hours, and individual mentors kept in touch with their mentees. This met the individual emotional and spiritual needs of the mentees during the difficult period. Mentors also helped mentees connect with the Volunteers Care Council and their various projects.

From the beginning of the pandemic the management decided to strictly keep ashram residents physically separated from the general public, congregation and staff. So all the deity worship, deity cooking, cleaning, organising online class schedules etc were performed by residents. A team of ashram members took over the temple’s horticultural department for a season, planting vegetables that were used for meals for the ashram members themselves, as well as for cooking for the deities in the deity kitchen.

There were even first and second initiations.

Previously known as the College of Vedic Studies, the new title of School of Bhakti represented a huge boost for courses and classes.

A significant part of the School of Bhakti’s success was its ability to move online in the form of zoom, Youtube Live feeds, a huge presence on social media, publications etc. It has been administered by dedicated ashram members, and with a large team of skilled volunteers from the congregation, its online presence has been high quality and, quite naturally, available globally to reach out to thousands in great need of spiritual knowledge and association. 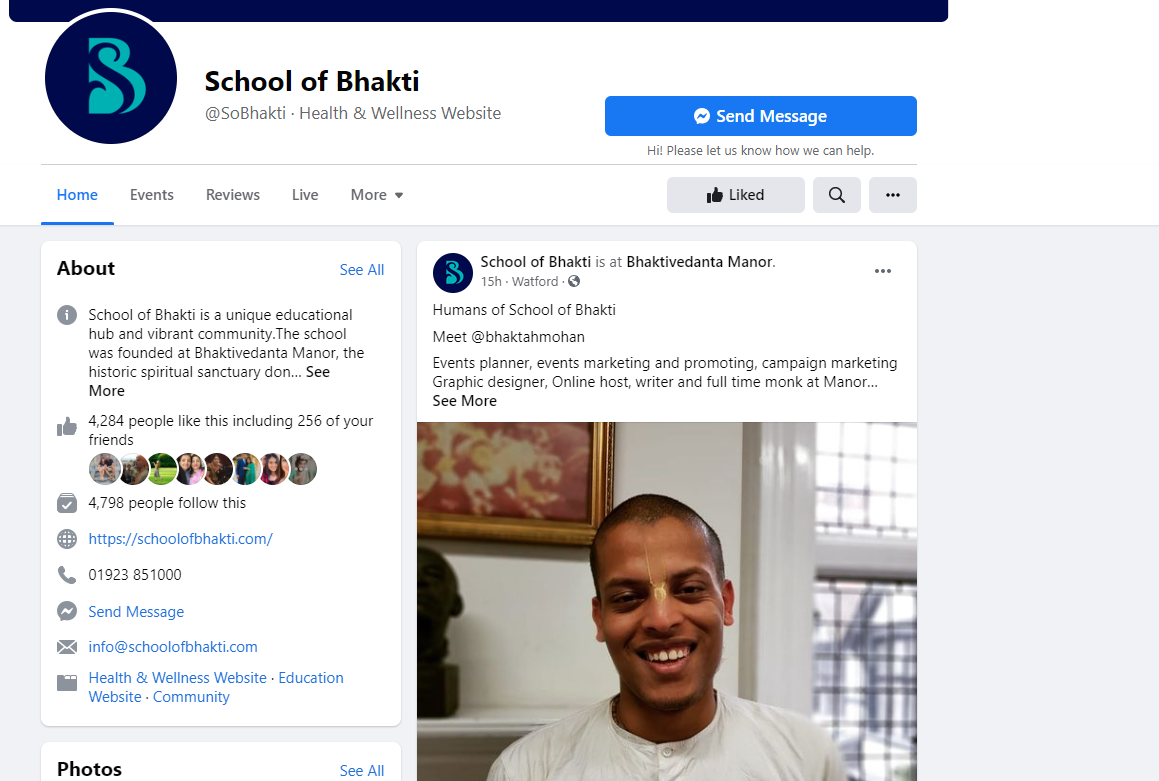 Students from 65 countries in six continents attended courses, including 10 affiliates organisations. They also had 12,000 on Instagram and have reached more than a million people on Facebook!

In 2020 there was a special Global Campaign focused on distributing Bhavavad-gitas all over the world, The Live to Give Campaign of the Bhaktivedanta Manor community alone distributed 27,150 copies.

Throughout the whole of last year, 60,864 total books were distributed. 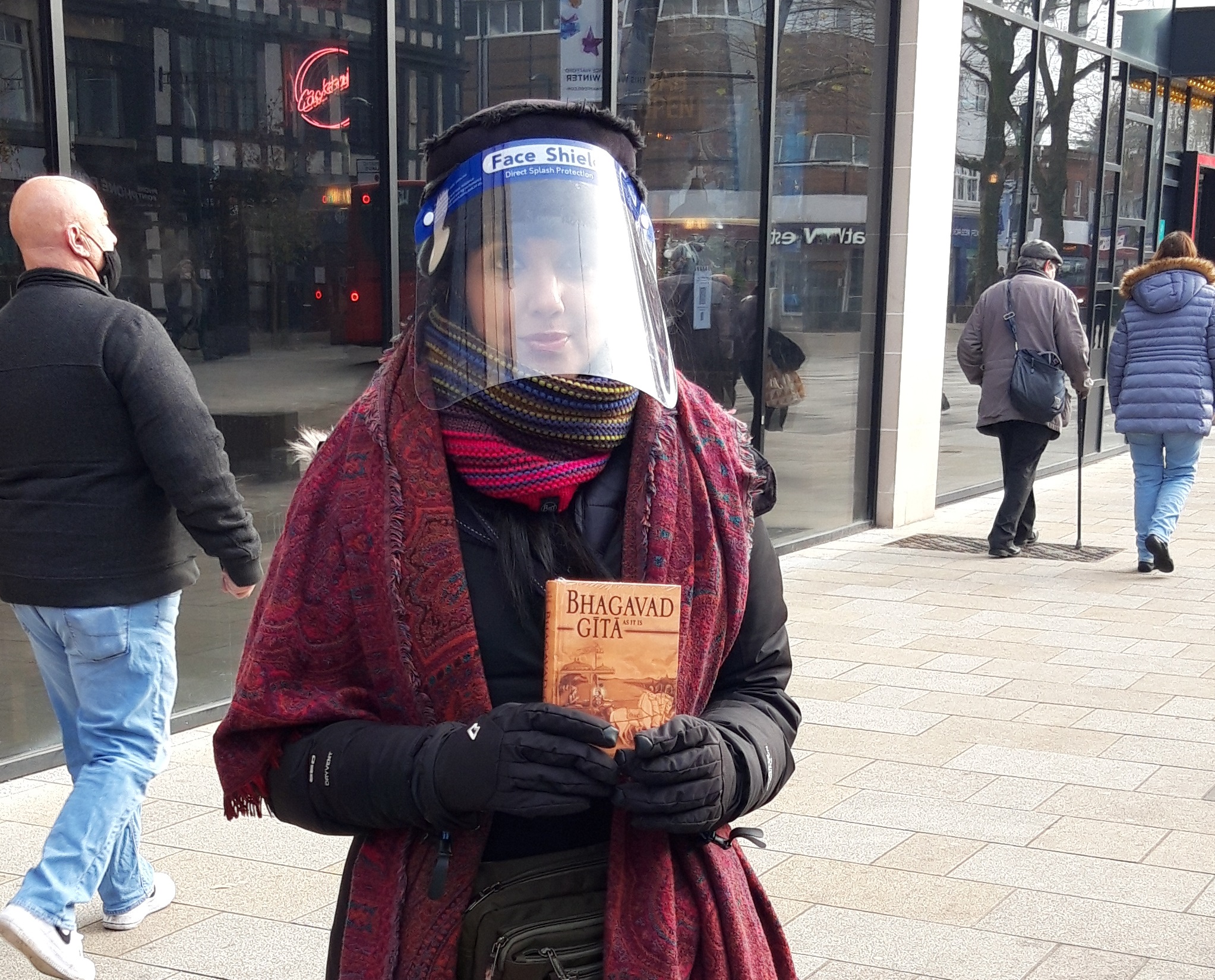 During the last 18 months, the Manor team have performed 75 hari nama chanting processions in the centre of 20 different towns. That is as well as the Saturday group that hits London’s West End, starting from the ISKCON-London temple.

Due to many devotees’ eagerness to serve, the Manor was able to celebrate all the major annual events in a safe way.

With help from volunteer camera, sound and tech crews, drama groups, kirtaneers and dancers performed in the Haveli for an online audience, broadcast on the Manor’s Youtube Live Channel and Mayapur.tv.

The Bhaktivedanta Players performed for online audiences for all major festivals, as well as other special events. There have also been numerous online classes, seminars, kirtans and other events. 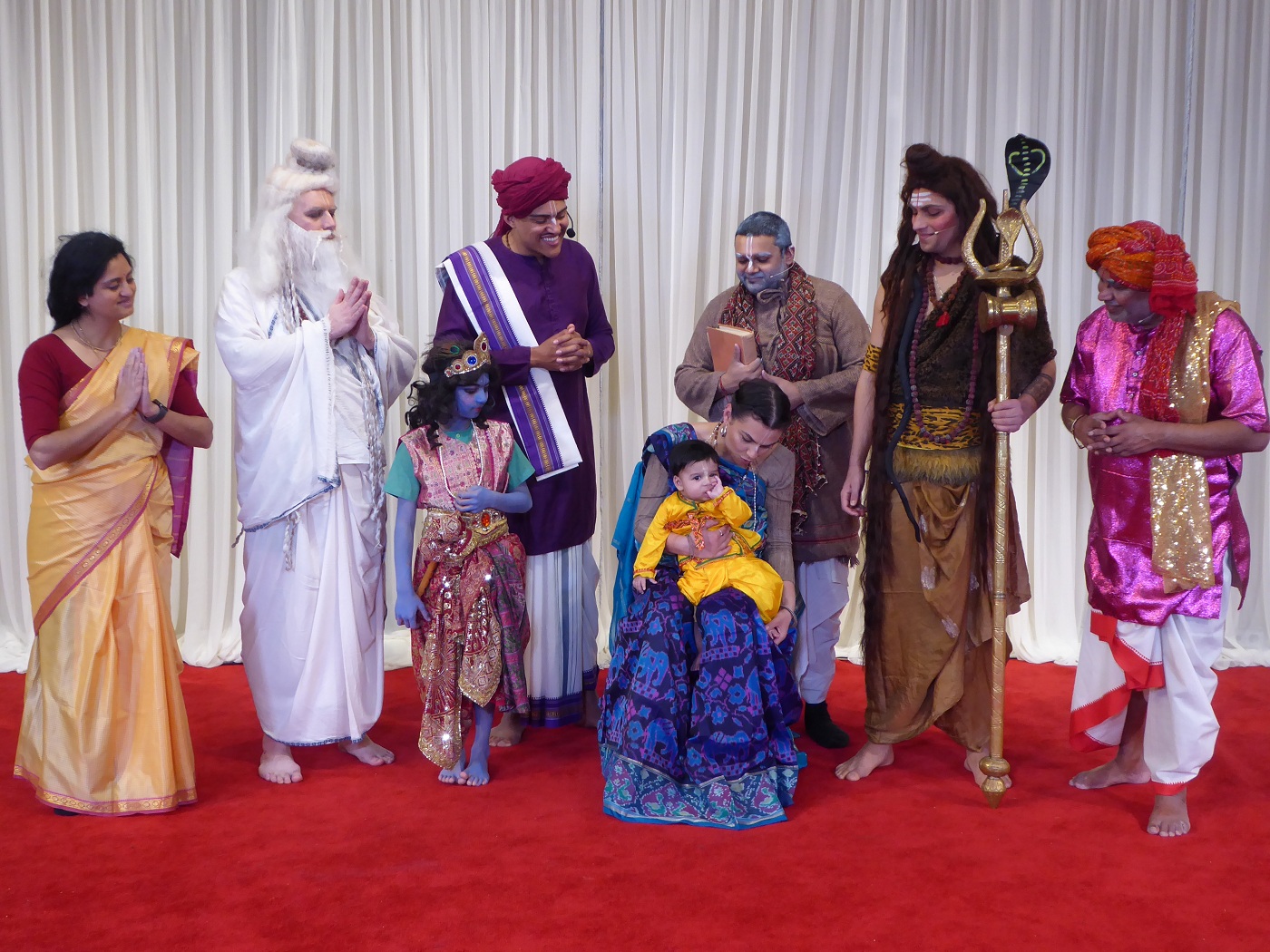 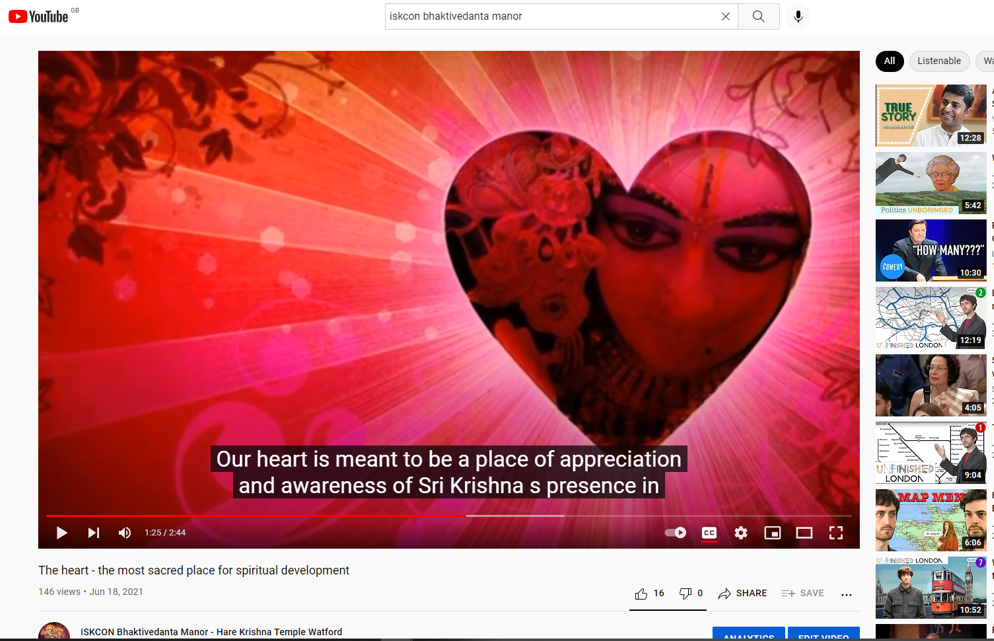