“My name is Yuliia Mudrak, I am 25 years old, and I am from Ukraine. Before the war, I lived in Kyiv and worked as a preschool teacher. Unfortunately, many devotees had to leave their normal life in Ukraine due to the war. But at the same time, we’ve been able to see wonderful examples of devotees in other countries, who show great concern for us Ukrainian devotees.

“One evening, after I moved into the temple in Kiyv, we were told it was too dangerous there and we were advised to evacuate. The following morning almost all the devotees left the city.

“I first decided to go to Poland and then went to the Vaishnava community at the Almvik Farm in Sweden, which was arranged through the ISKCON Relief Team.

“Throughout my stay there, the devotees helped me solve all the difficulties that arose and took great care of me. During that time I met Lalita Sakhi dasi and her husband Shyamasundara prabhu, from London. Lalita Sakhi dasi allowed me to come to England under the assistance program for Ukrainians, and stay at her house which is not far from the legendary Bhaktivedanta Manor!

“We do not know when the war in Ukraine will end. I hope it will happen as soon as possible. For now, I want to make good use of my stay here in England”. 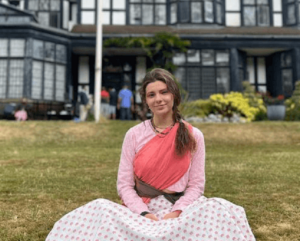 Yuliia now serves at ‘Gurukula – The Hare Krishna Primary School’ and attends the temple programs, and is meanwhile improving her English skills.

“All glories to all the devotees who are now helping the Ukrainian yatra and to the ISKCON Relief Team who are coordinating so expertly” she added. “The care is invaluable. And I want to express my special gratitude to the Swedish and English devotees”.

An audience with the Queen