ISKCON Appeals for Protection of Minorities in Bangladesh

Attacks on Hindu Temples and Communities Must Be Stopped

On 13th October, 2021, radical extremists began strategic, coordinated attacks on Hindu minorities in Bangladesh. The attacks continued until October 15th with innumerable homes, shops, puja pandals, and temples being looted, burned, and destroyed. Around 10 fatalities have been reported while many more people have sustained injuries or been hospitalized.

The attack on the ISKCON temple took place in broad daylight. The Ratha of Lord Jagannath, deities of Srila Prabhupada, spiritual books, vehicles, and other temple property/ paraphernalia were burned, destroyed, and looted. Four other Hindu temples  along with many other houses, shops, and institutions of Hindu minorities were also destroyed.

This is not the first time in Bangladesh when Hindu minorities were brutally attacked or murdered. The Bangladeshi government did not take visible steps to stop further destruction. The ISKCON Choumoni temple devotees had also pleaded with local police to provide protection, but these requests were ignored.

Seeing this gross neglect of duty from the authorities, approximately 500 radical extremists continued their attacks the following day.

The culprits behind these attacks have openly declared their actions on social media, repeatedly carrying out such atrocities again and again. Therefore, the Bangladeshi government should take immediate steps to set severe punishment and completely discourage extremists from performing such atrocities.

ISKCON protest vigils around the world: 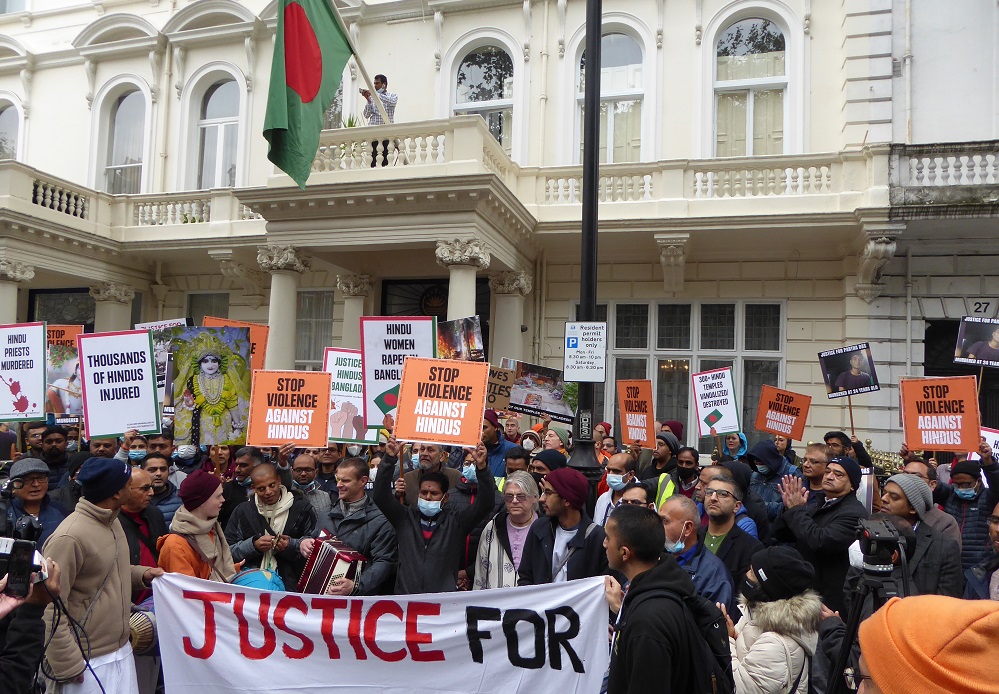 On Saturday 23rd October 2021, devotees and supporters staged a peaceful protest vigil outside of the Bangladeshi Embassy in London

How you can help

Offer special prayers to the worshipable lords in your home or the temple to please protect devotees in Bangladesh.

Because of the sensitivity of this situation, we strongly recommend that ISKCON devotees carefully avoid spreading inaccurate news. Any public statements or social media posts should be carefully considered and responded to with respect.

All queries and suggestions regarding the ISKCON Bangladesh Campaign should be directed towards info@krishnatemple.com

You may contact your local MP, urging them to contact the Foreign Secretary who in turn should approach the High Commissioner at the Bangladeshi embassy in London. We ask the Bangladeshi government to protect its religious minorities. Please note below some guidelines:

You can check this using this link

How long should I wait until I follow this up?

One week, you can follow up your letter with the following

Further to my letter dated […….. ] which I attach,  I look forward to hearing from you and whether you have made contact with the Foreign Secretary on this urgent mater.

Can I amend this letter (included below)?

This is only a template that you can edit. it will be more effective if you make it personal.

MPs are more likely to act if they receive an original letter sent by one committed, passionate constituent which is far more powerful than a pile of identical letters or postcards. Mass email actions and template letters have less impact because the MP knows that they only take a few seconds to complete and are not necessarily representative of the priorities of their constituents. The fact that you have taken the time to craft a personalised and well-informed letter demonstrates to the MP that there are people in their constituency that care deeply about an issue. In turn, your opinions are likely to be taken more seriously as a result.

It is important to be polite and not too emotional. You must not be threatening or rude.

How can I personalise it?

We would suggest typing or hand-writing the letter.

Every MP is different. Some are happy to correspond with constituents via email whereas others give a preference to written letters.

What to do afterwards?

Pressing ‘send’ or putting your letter in the post is not the end of your action!

Sample letter to your MP:

I write to you as my Member of parliament to bring to your attention the shocking  series of violent events directed against the Hindu minority in Bangladesh.

Between 13th and 17th October, multiple temples, homes, shops and individuals were attacked across several districts of the country. More than eight innocent members of the Hindu minority were killed for no reason other than their religious affiliation. Temples and private properties were burned, vandalised, and destroyed.

I am a congregation member of Bhaktivedanta Manor ISKCON Temple in Watford one of the largest Hindu temples outside India. It is with heavy hearts we pray for the souls of two priests, Pranta Chandra das, and Jatan Chandra Saha, who were murdered during these attacks at an ISKCON temple in Bangladesh. We are holding prayers for Nimai Chandra das, a monk, who remains hospitalized in a critical condition.

I would humbly ask you to contact the foreign secretary to make him aware of this situation and the plight of minority Hindus in Bangladesh. I would ask that he obtain assurances from High Commissioner of Bangladesh that the Bangladeshi government will take swift action to bring an end to the violence against minorities that has undermined the peace and well-being of Bangladeshi society and to take tangible steps to ensure the long-term safety and well-being of all minority Bangladeshi citizens. That includes to:

I will be involved in a protest outside the Bangladeshi Embassy on Saturday to highlight this ongoing situation then marching to Parliament. We shall be demanding that the perpetrators of violence be held accountable, and the safety of all Bangladeshi minorities be ensured.

I ask that you please act on this at your earliest as the violence against Hindus continues. I also wanted to thank you personally for the way you have always represented your constituents so effectively over the many years.